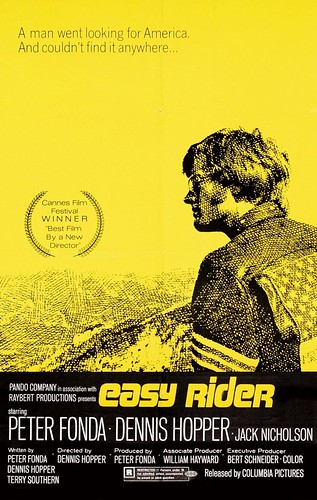 The opening credits actually contain all of the filming locations that we currently have (we don’t have them all at this point). This will be a work in progress as we travel.

Here is a video of the opening credits to set the proper mood, as well as the context of the scene, which we love, with Steppenwolf’s “Born to be Wild.” Classic.

Interstate 40 East, Crossing the Colorado River at the California/Arizona Border 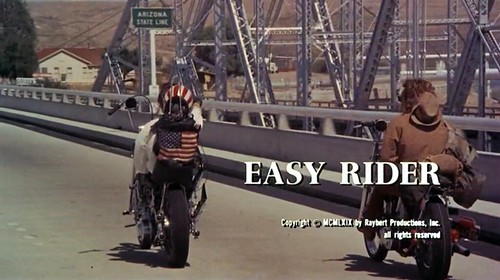 Below, you can “drive” the same location on Google Street View.

Here is another view from this scene filmed from I-40, with the Red Rock Bridge first, and the Old Trails Arch Bridge more clearly visible behind it. 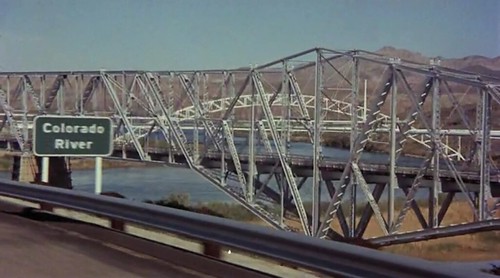 Since the scene was along the Interstate, our best replication was taken through the windshield. Not great quality, we know (dirty windshield!). 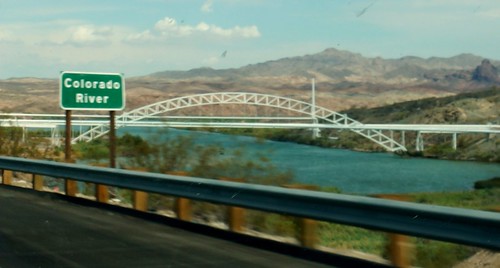 Here is a better view of the Old Trails Arch Bridge, taken from the California side (Park Moabi exit). 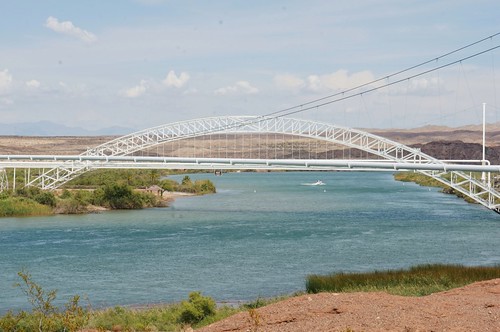 Golden Shores/Oatman Exit 1 off I-40, near Topock, Arizona

This scene was filmed on the Arizona side of the Colorado River, the first exit after the I-40 crossing above. The road that Billy and Wyatt are seen riding is on the south side of the Interstate, and is an old alignment of Route 66, leading to the Old Trails Arch Bridge (privately owned by Pacific Gas & Electric). 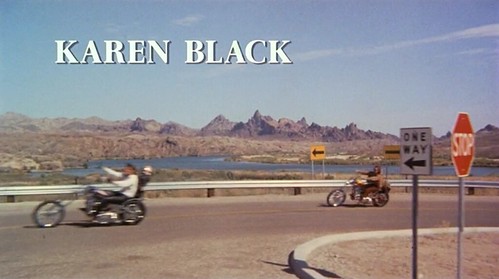 A view of this scene taken from across the road. 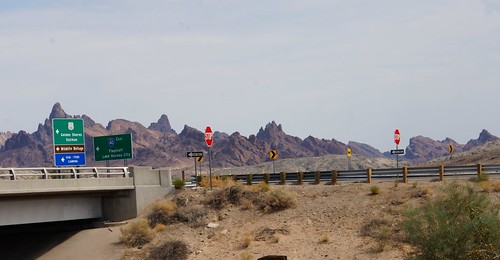 Here, through the magic of film, Wyatt and Billy are back west, in Calfornia again. This scene was taken off the first exit on the California side of the Colorado River, Exit 153, Park Moabi Road.

The view below is looking north on Park Moabi Road, toward what is now an RV resort called Pirates Cove Resort & Marina, near Needles, California.

From assessing this scene and the photo below, we believe that some changes were made to the road since the film was made. The curves seen in the screenshot above do not exist in the road today, and judging from satellite views of the location, it appears there are remnants of curved road here. But without research (or the opinion of some of our Route expert friends, we won’t state this as fact, just casual observation. However, it definitely safe to say that this is a very close approximation of the location of this scene. As the co/owner of a small retro trailer (Serro Scotty HiLander), we actually like the scene in 1969 with the cool canned ham trailer!

Additionally, Park Moabi Road north, leads to an old alignment of Route 66, which eastbound leads to where the Red Rock Bridge (from the screenshots above). 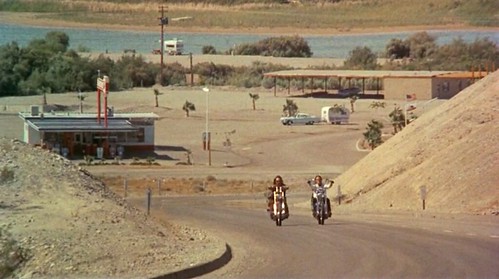 Oddly enough (and ignore this now if you aren’t into geeky details…just enjoy the photos), in reality, this scene was filmed from the same spot as the shot above. If you watch the YouTube video, you will see that as Wyatt and Billy are riding up the hill, the camera smoothly pans across, following them as they proceed south on Park Moabi Road.

Interestingly (and this could be the result of the technical differences between movie and still cameras), while the film was shot from the same location (by the railroad on Park Moabi, where an old alignment of Route 66 goes back east), our photos were taken some distance apart on Park Moabi. This will be evident to anyone who drives Park Moabi in real life (or check it out on Google Street view).

Here is the view as they rode south on Park Moabi Road. 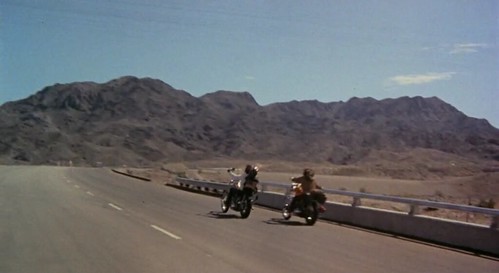 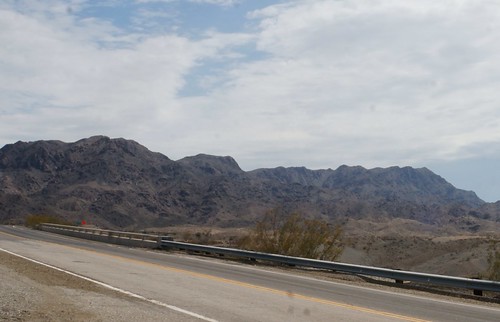 This scene was filmed on Route 66 (S. Milton Street, near Tuscon Avenue) in Flagstaff, Arizona. Billy and Wyatt are passing what was the Lumberjack Cafe. This lumberjack statue is still in Flagstaff; not at this location, but instead at Northern Arizona University, at the J. Lawrence Walkup Skydome, along with a similar twin. Their team is the Lumberjacks, and he serves as their mascot. 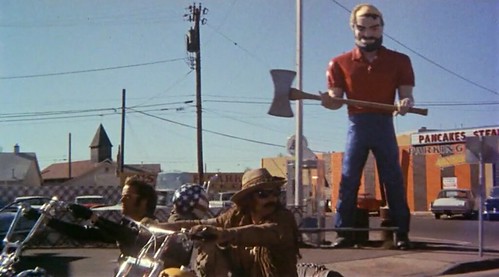 This is the scene today, at what is now called Granny’s Closet. The lumberjack that was visible in Easy Rider is now located at Northern Arizona University. Below is Little Louie, who was not visible in Easy Rider, but has been at the Lumberjack Cafe since the 1960’s, along with the two other Bunyan-type statues.

For more detailed information on the Bunyan lumberjacks and Little Louie at the Lumberjack Cafe, please see this page on RoadsideArchitecture.com 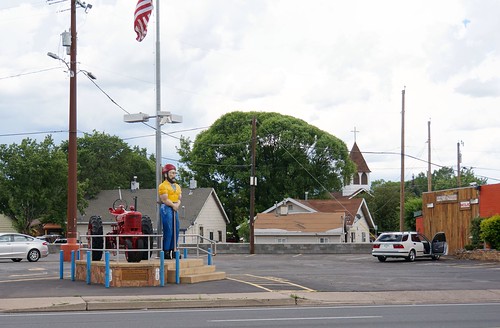 In this scene, they are a bit farther east on Route 66 (near N. Leroux Street) in Flagstaff. This building was the Canyon Hotel at the time, with a camera shop also. 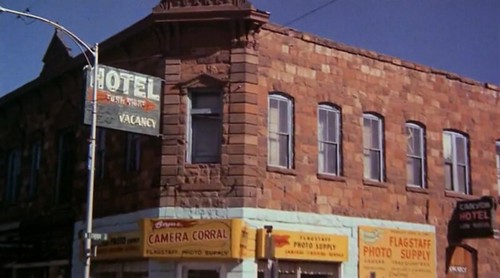 The building in 2014. Several businesses are listed at this location, such as an Architectural Design Studio, Flagstaff Piano, Clock and Fine Art Gallery, and a realty company. 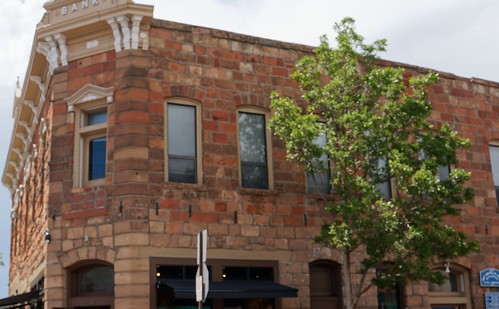 The scene below is just a block east from the location above, also on Route 66, looking south onto S. San Francisco Street). 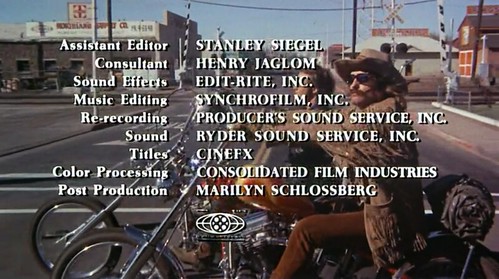 That’s all for now! We had a screen capture of a couple others that we missed. One is a quick cut of them at another angle in the view above (we were right there and totally spaced taking a photo…next time!). Another location is a bit farther west in Bellemont, Arizona. Again, a work in progress that we’ll add to over time. There are many other locations in the movie in New Mexico and Louisiana (of note), so as we travel to those areas, we’ll add to this page!