Plans change; relax and go with the flow…

Well, you know what they say about the best laid plans…OK, we didn’t really have an actual trip plan yet; just a general declaration that we were going to go west instead of east this year, and our destination would be South Dakota, and we’d travel in September.

We’re still heading west, only now we’ve bumped up the trip to July! After talking it over, Pat and I decided that since I was planning on taking two weeks off work to watch our grandson, we might as well just take him on a road trip, rather than me just using two weeks off to stay home. Pat only has a week available, so I’ll spend my first 4 days locally with my grandson, then we’ll hit the road for the rest of the time.

So then, the next question came up…where should we go? Take him to South Dakota? I immediately thought “no” on that…he’s only 3, so we need to go somewhere he can connect to and get excited (which I am sure we could do if we went to South Dakota). But now with the date bumped up, I’m not sure how intensely I want to plan on a new unknown destination with him. I’m feeling called VERY strongly back to the familiar and comfortable – the Mother Road. We can travel Route 66 without detailed plans or schedules (though I do want to make a few plans to visit kid-oriented attractions that Pat and I would not typically visit on our own). I already had a copy of our Route 66 friend Emily Priddy’s book, “Route 66 for Kids,” a first edition copy we bought when she first published it in 2003. I found that she has since created a Kindle version, so I bought it (see previous link). She also has a companion website, Kidson66.com, with additional information and even some fun coloring pages that can be printed out and brought along. Getting some great ideas!

Another bonus to taking Route 66, is that our grandson is familiar with Route 66 – not only due to our direct influence indoctrinating him into the Route 66 fold, but the Disney/Pixar film Cars is largely set on Route 66, in the fictional town of Radiator Springs, which is a composite of many places along the Mother Road. Route 66 lends itself heavily to the film, and is a driving theme of slowing down, taking the scenic route, enjoying life and the scenery along the way. That theme is the essence of Route 66 and the towns along the route, and there’s history about the rise and fall of the two-lane, with the coming of the interstate, and its effect on the towns that were bypassed.

Pat and I (along with other Route 66 roadie friends) learned about Cars many years before its release (5 long years!!!), from Route 66 author and historian Michael Wallis and his wife, photographer Suzanne Wallis. Michael served as the Route 66 consultant for Pixar, leading them along several Route 66 journeys, fully absorbing them into the road. If you own or rent the DVD of Cars, there is a good “making of” bonus feature, with footage of the Pixar team traveling Route 66 with Michael Wallis. Not only did Michael Wallis serve as the Route 66 consultant, but he also was given a role in the movie – the Sheriff – and Pixar did a great job animating the Sheriff to resemble Michael, with the car’s front grille resembling Michael’s mustache. 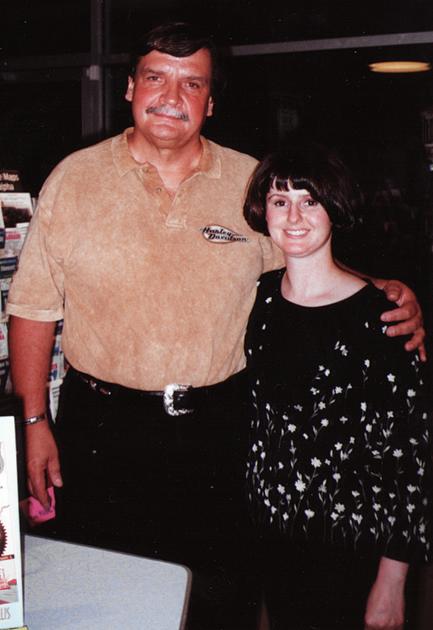 Pixar did an excellent job of incorporating the people and places of Route 66 into the movie – whether they outright animated a building (Ramone’s is dead on to the Conoco-Phillips station in Shamrock, Texas – or paid homage to them, like the mountain range that resembles Cadillac Ranch in Amarillo – or somewhere in between, like the Cozy Cone, which is based upon the Wigwam Village motels (route 66 has two – one in Holbrook, Arizona and the other in Rialto, California). For an in-depth comparison of Route 66 locations to Cars, check out our friend Ron Warnick’s page on his Route 66 News site: A Route 66 Guide to the “Cars” Movie

We know we’ll have fun showing our grandson the Route 66 sights he’s already familiar with, but can be excited to see and experience for himself. While we were looking forward to a new destination, I’m actually feeling really good about visiting an old familiar friend. We may just veer off on our way back and take a different route…we’re not sure yet, but we’ll have fun and enjoy no matter where the two lane roads take us.

This entry was posted by Jennifer on May 30, 2014 at 5:03 pm, and is filed under Road Trips. Follow any responses to this post through RSS 2.0.You can leave a response or trackback from your own site.