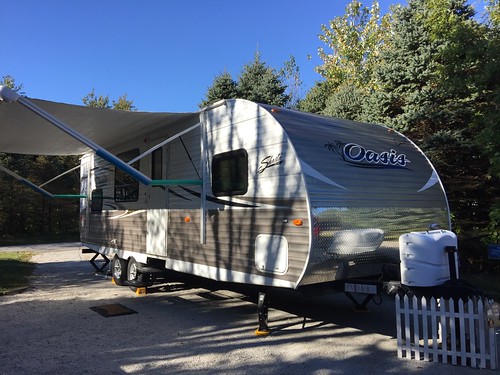 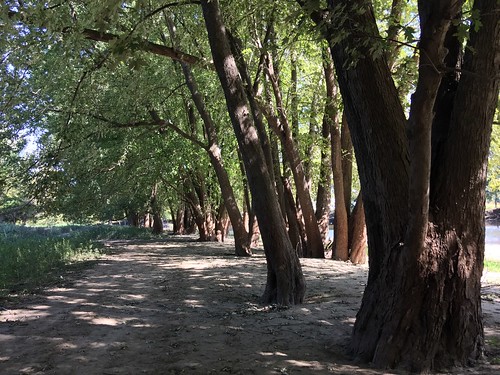 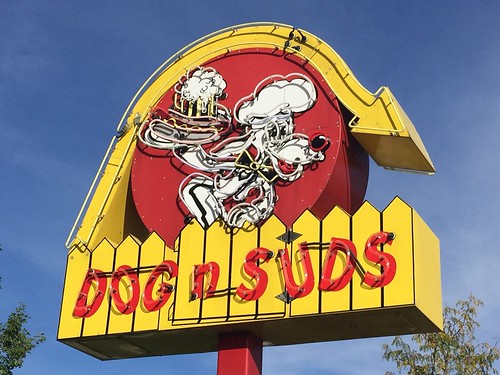 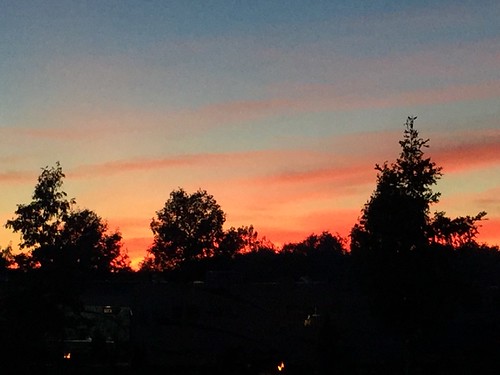 As indicated in my previous blog post, we are selling our Serro Scotty HiLander travel trailer. We are having growing pains (or at least, the beginning of them), and it’s a good time for us to move on up…to a bigger travel trailer!

We started out with our first travel trailer being a small T@B, which was good for a couple, but yet we actually quickly outgrew that, even without additional family! 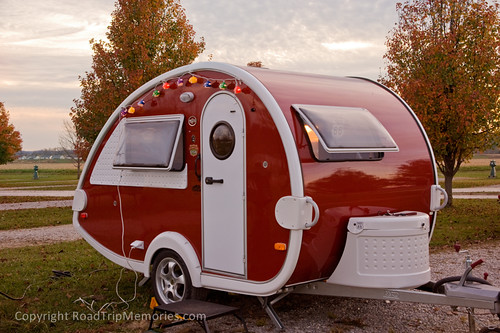 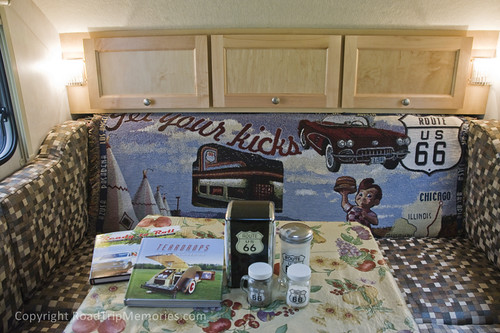 And not to mention: no bathroom! But we made “do”… 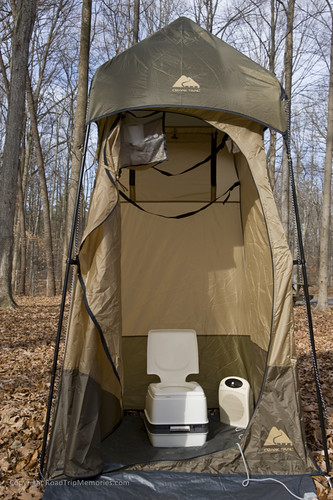 After buying the T@B in September 2009 and camping throughout the fall and winter into 2010, we realized that while we loved camping and the T@B, it was too small to be comfortable (yeah, I know it’s not roughing it compared to tent camping, but in the RVing spectrum, it is!).

After researching options that would suit us (roomy, with a separate bed and dinette, bath/shower, etc.), we settled upon the 2010 Serro Scotty HiLander, which fit all the criteria we wanted and was retro and very unique! It was (and still is) a great little trailer, but there is a certain irony about buying a small camper and within a few weeks discovering that there will be a grandchild coming (our first!). We knew the Scotty would have some room for him or her because of the two dinettes, both converting into beds, so no matter. 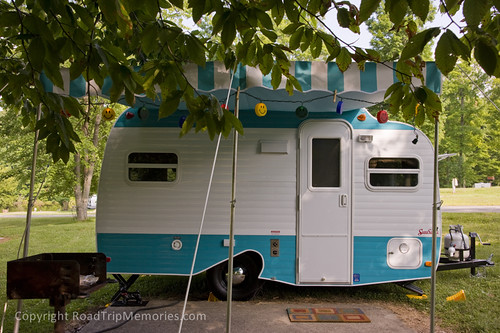 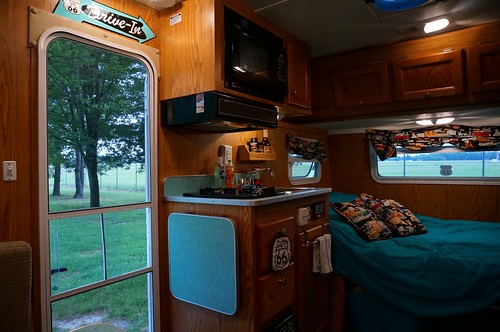 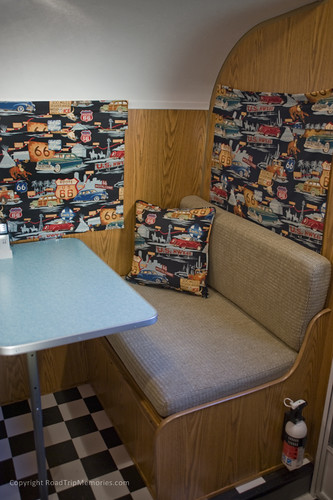 Sure enough, a year later, in June 2011, we took our 4-month old grandson on his first camping trip. Being a happy baby, he loved everything…so of course, we didn’t know whether he’d grow to love camping. We hoped he would, and his enthusiasm for our little Scotty grew as we continued to take him camping (or even sleeping in it at home too – come on, RVers…we know you do too…). As he became mobile throughout 2012 and started getting into everything, we decided to hold off camping with him for a while. Obviously, kids don’t always “settle down” for a while, but he was at an in between time where it was hard to keep him from getting into everything, so he was relegated to driveway camping (subsequently referred to as garage camping when we built a garage suited to house the Scotty).

Fast forward to 2015. Much better weather than 2014 – so far, not as much snow or subzero temps afforded us the ability to get the Scotty out a couple of times. Still a bit chilly to take a young child (he’s almost 4 now), so it was just Pat and me. And as we found out last summer, we are expecting grandson number 2 in March! So our thoughts this trip revolved around envisioning us and two little guys in the trailer. Pat and I were feeling a bit crowded ourselves…not to mention adding my grandson (this is going to be the year he finally gets to resume camping with us!). But now, to add a baby to the tiny trailer too? I just couldn’t imagine how we were all going to fit, plus our stuff…and we don’t even bring that much! But kids and babies just necessitate so much stuff of their own.

As an aside, since becoming RVers, we have also thought much more about our future retirement plans, and whether we would spend them fulltiming or part time/snowbirding / extended traveling. Either way, we want the flexibility to see more of the country than we can now and some sort of RV will be a part of that experience. Most of our visits to RV shows involve looking for the rig of the future, and ironically, we just made several visits to the January RV show looking mainly at rigs for that purpose.

On the way home, I had the idea of updating to a larger travel trailer now…not as large as the one we’d think about in the future, but large enough to comfortably accommodate us, the grandsons, and even my daughter if she’d like to join us. Too bad, we hadn’t looked at too many in that size range at the shows. I didn’t say anything to Pat about it, and then he suddenly posed the very question to me! I laughed and told him I was thinking the same thing!

As we talked about it, we knew that because we’re debt free, and in a fairly frugal mode, we’d not spend alot of money or incur too much debt. Debt makes me really bristle!! So we needed something fairly inexpensive and even more so, that we would sell our Serro Scotty HiLander. We absolutely adore that trailer (and I’m sure many RVers know this feeling of attachment well). We had it customized to suit our imagination, and even built a garage with dimensions that allowed it to fit inside, protected from the elements. But to justify the upsize, I need to sell it to reduce the new loan, and to minimize maintenance, insurance, etc. Just can’t see having two trailers. So here’s hoping that there’s a buyer out there to LOVE our Scotty as much as we do.

So on to the new trailer. We really struggled with the idea of a generic box, but when it comes down to it, it’s going to be the memories and experiences – the family time together – that are most important. We still love the cool factor of our Scotty and always will, but we need to move up and be comfortable. We looked at many brands, dealers, styles, etc. and found a layout that we liked and will work for us.

As to brand, the Shasta is an iconic brand, though the trailer itself is modern in style and design, as well as standard RV materials. We settled upon the Shasta Oasis 25BH model, which we ordered from Mt. Comfort RV – great working with them and negotiating on a good price.

This is the same interior fabric, countertop and floor materials as we selected. The only differences from this model and the one we ordered, are that we added the following options: a full top bunk, instead of the single; oven, exterior shower, and aluminum wheels.

Our new Shasta Oasis should arrive in late March or early April, so for now we’re not camping (yeah, we do camp in winter and enjoy it!). And the irony is that the weather this winter isn’t as bad as last year’s Polar Vortex and constant snow, which scarcely enabled us to camp.

Change can be tough in some ways, but great in others. We’re sad to see the Scotty go, but know its new owners will enjoy her very much. We’ll enjoy fun times with our grandsons in the Shasta Oasis…and it’s always best to enjoy life, no matter what!